Transport for Greater Manchester (TfGM) has announced the city-wide roll out of a series of AI controlled smart traffic junctions. 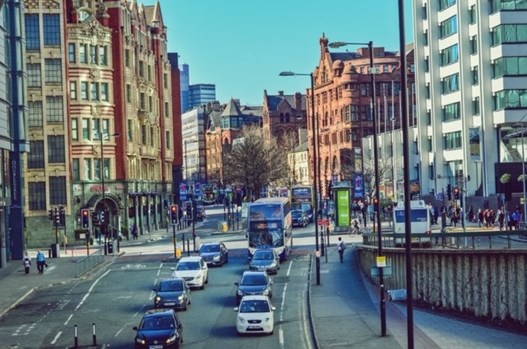 It has been working on the project with traffic management specialist Vivacity Labs, with the first system going live early this year then scaled up to simultaneously control three junctions in the Blackfriars area of Salford.

TfGM said it is now aiming to install the technology at 20 junctions around Manchester by the end of 2021.

It involves using Vivacity’s proprietary sensors with built-in AI to anonymously identify different types of road users, such as cyclists and people on foot, at selected junctions and adjust traffic signals to give them priority.

Each sensor provides real time data feeds on counts, classifications, speeds and journey times of vehicles, along with information on the build-up of queues. This provides reinforcement learning algorithms – an extension of machine learning popularised by Google’s Deepmind – with a broad understanding of situations which feeds into short term optimisation of the signals.

The algorithms have been developed through a series of simulations created by Immense Simulations, taking in detailed datasets of every element of road movements.

Richard Dolphin, highways network performance manager at TfGM, said: “Hopefully, this development will continue into something that will positively disrupt the industry and revolutionise active travel in urban areas.”

The project has been co-funded by Innovate UK, alongside Immense Simulations, and its expansion has been supported by the Department for Digital, Culture, Media and Sports’ 5G Create Fund.

It is aimed at taking traffic management beyond the capabilities of the SCOOT system that uses data from inductive loops buried in roads.