Criminals who commit alcohol fuelled crime may be banned from drinking and made to wear ‘sobriety tags’ after new legislation for England and Wales came into force today. 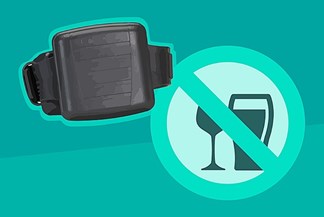 The tags are fitted to the ankles of offenders subject to alcohol abstinence orders and monitor their sweat to determine whether they have consumed alcohol. If the tag creates an alert that they have breached the order they can be returned to court for further sanctions such as a fine, extending the length of the order or in some cases imprisonment.

The Ministry of Justice (MoJ) said the technology can distinguish between alcohol based products, such as hand sanitiser, that could be used to mask alcohol consumption and can detect when contact between the skin and the tag has been blocked.

Under the legislation, courts will be able to order offenders to wear a tag for up to 120 days as part of their rehabilitation. However, they will not be fitted to people who are dependent on alcohol or have certain medical conditions.

This follows two successful pilots, one across Humberside, Lincolnshire and North Yorkshire, and another in London, which showed offenders were alcohol free on 97% of the days monitored. In both areas 94% successfully completed the requirement.

Wearers also reported a positive impact on their lives, wellbeing and behaviour.

A national roll out will begin later this year.

Crime, Policing and Justice Minister Kit Malthouse MP said: “Smart technologies like sobriety tags not only punish offenders but can help turn their lives around. While prison will always be the right place for many criminals, tough community sentences like this can help cut re-offending and protect the public.”

Keith Hunter, police and crime commissioner for Humberside, said: “During the trial in our area they provided rehabilitation agencies a real opportunity to work with the individual and get them to recognise and change their behaviour.

“Undoubtedly their use will help reduce the number of victims of alcohol related crime, many in domestic situations, and aid the rehabilitation of offenders as they become a standard feature of the criminal justice system.”

The MoJ said an estimated 39% of violent crime involves an offender under the influence of alcohol – with the social and economic cost of alcohol related harm being £21.5 billion per year.

The move follows last year’s roll out of GPS tags that monitor an offender’s location 24/7.