Scotland’s Towns Partnership (STP) has agreed on a digital partnership with Edinburgh based network provider Commsworld. 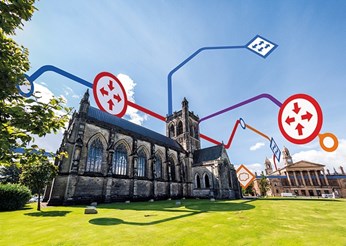 It will involve the company playing an advisory role for members of STP on how to deliver connectivity to their areas as part of the Digital Towns initiative.

STP, which includes public sector and business organisations from areas around Scotland, said it hopes the partnership – which is open ended rather than being fixed to a timeframe – will produce blueprints and more collaborative approaches towards extending and strengthening connectivity.

Its chief officer, Phil Prentice, said: “We are pleased to be partnering with Commsworld as Digital Towns will be a key feature of the post-pandemic, net zero agenda.

Commsworld has a strong footprint in Scotland, with projects including last year’s completion of the build of a full fibre network for rural towns and villages in Renfrewshire.