Ordnance Survey (OS) has launched a new platform for access to its geospatial data. 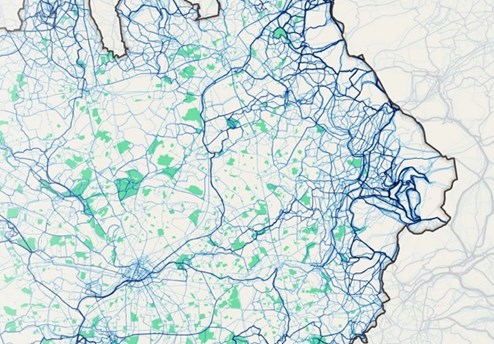 Named the OS Data Hub, it will give users free access, up to a threshold, to OS MasterMap data. It will also provide up to £1,000 per month of free access other datasets, including 1:25 000 leisure mapping and road network data, through a series of new APIs – and give unlimited free access to OS OpenData products.

The national mapping agency said this will make it easier to work with the data, obtain updates on demand and provide for enhanced data visualisations, insights and analytics. It should also support existing customer applications such as navigation and asset management.

This announcement is the first output from the Public Sector Geospatial Agreement (PSGA), which was launched in April. OS said that through the agreement it will be delivering new data with improved accessibility and increased freedoms to share.

Chris Chambers, head of PSGA at OS, said: "The new OS Data Hub and APIs are a significant step in improving access and usability of OS data and I look forward to seeing a new wave of developers working with data on the next generation of apps and services."

The move follows a trial with over 700 users, feedback from which has been positive with the sharing of ideas for potential use cases, said OS.

Public sector members of the PSGA will not have access to the APIs in the OS Data Hub until January 2021, but can access OS Places API, a look-up service for searching and matching address information based on AddressBase Premium.

OS has also announced other developments including a reduction in royalties by up to 80% for the offline use of data, including property level address data.

It has set up four new OS OpenData products through the release of identifiers including unique property and street reference numbers, to be released under the Open Government Licence and supported by an updated identifier policy. It said this will make it easier to link and analyse location based information.

Along with this are new freedoms for the public sector organisations to publish more of their authoritative data under open licence terms, including property extents and data held against unique property reference numbers, unique street reference numbers and topographic identifiers. It is expected that this will deliver greater levels of data sharing and increased interoperability between important government datasets.

OS has also launched a new plug and play product named AddressBaseCore to produce access to its property address data.

The organisation’s chief executive officer, Steve Blair, said: "These new services, datasets and changes to licensing are only the beginning. We have an ambitious plan, working in collaboration with the Geospatial Commission and expert user groups, to bring improvements and new developments that will show customers how to see a better place and deliver positive impact.

“We look forward to working closely with our customers to ensure that our data continues to support business and innovation, efficient delivery of public services, and economic value for the UK."