The North of Tyne Combined Authority (NTCA) and Newcastle University have given their support to the use data science to support the operation of a foodbank in the city. 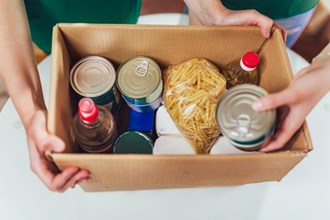 They have provided funding for scientists from the National Innovation Centre for Data (NICD), based at the university, to work with the Newcastle West End Foodbank to discover who is using it and their needs.

NTCA said it could “revolutionise” the way the foodbank and other organisations in the region plan and deliver their services.

It has highlighted the results of a project, carried out between April 2020 and March of this year, in which a team of data scientists from the NICD analysed data from food vouchers given to tens of thousands of people by around 150 agencies, including Citizens’ Advice, community centres and churches.

It revealed a 49% increase in the number of vouchers fulfilled by the foodbank compared with the previous year, and showed that during the Covid-19 pandemic unemployment and low incomes overtook benefit changes as the main reason for people using it.

Mayor Jamie Driscoll said: “This is about using big data to help a small organisation help a lot of people. It involved analysing thousands of food bank vouchers to see the way in which the foodbank was helping, and where things could improve.

“But it doesn’t stop there. The information gathered will help other organisations in the North of Tyne working to help those in need.

“Businesses, big, public sector organisations and charities are all sitting on a wealth of data that, if properly exploited, could transform the way they work.”

Between April 2020 and February 2021, the foodbank provided meals to 53,000 people. Now the foodbank team will share the lessons learned with other organisations.

Newcastle West End Food Bank chief executive John McCorry said: “We knew we had a lot of raw data and we wanted to use it to better understand the clients that are using our services, to see what their needs are and maybe adapt to better support them.

“It told us our current food banks are in the right areas but we’re also looking at where other areas of need exist. And we’re looking at who else is supporting people in need and how we can best work with the council and its Active Inclusion Unit.”

NTCA is now investing £1.6 million, in addition to investment from the university and the Government in the NICD.