The Probate Service has begun to accept online applications from personal applicants as the latest step in the digitalisation of legal services. 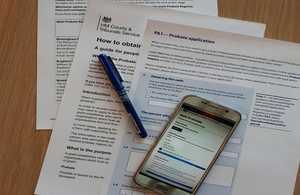 It said it will now accept the applications based on three criteria: that only one executor is applying; an original will is available and was not updated; the person who died lived in England or Wales. The online form will include a new ‘statement of truth’ and comes with an online payment channel.

Online applications will be extended to solicitors and other professionals later in the year.

The Department for Transport (DfT) is developing a Digital Data Index to help its staff find the data they need, and supporting expertise, for various projects and tasks. Its digital capability lead, Alan Rider, said in a blogpost that it has completed the alpha phase and is now securing internal sponsorship and funding for the beta stage.

An operational proof of concept involved 600 DfT datasets to support user research, along with speaking to more than 60 people in the department. It led to the development of an operating model and delivery blueprint.

“The benefits of demonstrating how an agile project like this can work are already paying dividends,” Rider said. “We are now using the same approach as a model for other agile projects.”

Environment Agency enforcement officers in the North-East have begun to test the use of body worn cameras in a six-month trial. It is aimed at reducing the number of incidents of anti-social behaviour, assaults and threats against staff, particularly those working with regulated and illegal waste sites.

Officers taking part in the pilot have been given guidelines on the cameras’ use, which include only switching them on in a hostile situation and informing people they are being filmed. Any footage will be deleted after a month unless required for evidence.