New British rail operator to widen use of digital ticketing

The government’s new integrated rail operator will extend use of contactless payments, online and mobile ticketing, as well as setting up a single website and app 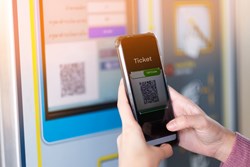 Great British Railways (GBR) will run the rail network across Great Britain, absorbing Network Rail, but it will also take over most interactions with passengers including selling tickets and setting most fares and timetables.

A white paper published by the Department for Transport says GBR will widen the use of ‘pay as you go’ contactless card and mobile payments from London to other urban and commuter services. It will also make more use of online, print at home and mobile ticketing for season tickets, regional and long distance journeys.

In an early change, transport minister Grant Shapps said that a smartcard or mobile ‘flexible’ ticket allowing eight days’ travel within a 28 day period will be on sale from 21 June for use from 28 June. This has been designed to appeal to commuters who plan to travel to the office on just two or three days each week.

GBR will set up its own website and app, which the command paper says “will end the current confusing array of train company sites” and provide live information on delays. The government plans that the site and app to help GBR gather data on passengers and tell them about offers and promotions, and in time become a portal for all public transport services. Private operators will have a reduced role, with franchises replaced by passenger service contracts under which companies will generally be paid a flat fee to operate trains for GBR. However, the contracts will vary in nature with some having greater commercial freedom.

The paper said that the devolved administrations in Scotland, Wales, London, Merseyside and Tyne and Wear will continue to have their existing powers over train services in their areas, meaning that GBR’s aims to digitise ticketing may apply mainly to England. The Scottish Government, which plans to nationalise its train services, complained that it had not been consulted on the plans.