The National Audit Office (NAO) has published an interactive tool to show the results of auditor reports on local bodies in England in 2017-18 and 2018-19. 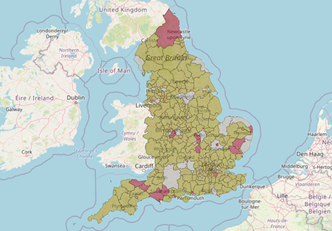 It can also indicate where different types of report are available, including opinion on the financial statements, value for money arrangements and additional reporting powers.

It builds on the NAO’s 2019 report on local auditor reporting in England, which describes the roles and responsibilities of local auditors and relevant national bodies in relation to the local audit framework and summaries the main findings reported by local auditors in 2017-18.

An NAO spokesperson said it intends to update the tools with new round of reports after they are finalised, most likely by spring of next year.

Image: Example of map from NAO