Highways England has announced plans to roll out technology for checking tyre safety on commercial vehicles across the country. 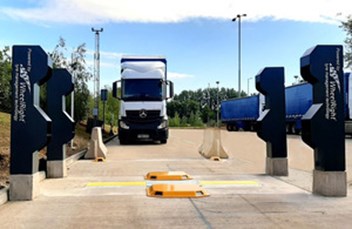 This follows trials at a handful of sites over the past year and is aimed at improving safety on the roads.

Highways England’s Commercial Vehicle Incident Prevention Team (CVIPT) initially backed a pilot of the WheelRight quartz sensor system at Keele Services on the M6 before running year-long trials with John Lewis at Milton Keynes, AW Jenkinson Transport at Penrith and the Driver and Vehicle Standards Agency at its check site at Cuerden on the M62.

One in 12 of 100,000 tyres checked proved to be underinflated and around 5,000 overweight vehicles were identified each month.

The agency said the system will be implemented at strategic route locations across the country.

It comprises a set of high intensity strobe lights, all weather cameras and drive-over pressure instruments that collect data that is passed on to the drivers through an app or a print-out so they can make adjustments to ensure their tyres meet safety standards.

Wheelright can also provide hourly, daily or monthly reports by email if required.

A spokesperson for Highways England said the use of the system has been voluntary and that it does not retain data on individual vehicles, but has collected aggregated figures that it could potentially use in the future. The agency expects to carry out more work in the area.

Highways England chief highway engineer Mike Wilson said: “We are constantly looking for ways to ensure everyone who travels or works on our network gets home safe and well and CVIPT can be very proud of the work they are doing to help us achieve this.”