Scotland’s Improvement Service (IS) has begun to publish health and social care datasets on its Spatial Hub to support the country’s Covid-19 response. 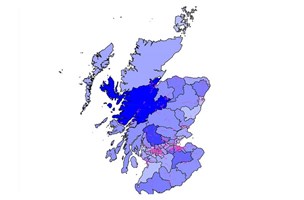 It said the datasets cover services such as care homes, GP practices and pharmacies, and are accompanied by metadata on the Scottish Spatial Data Infrastructure and accessible as web services or file downloads.

The Spatial Hub is a repository for spatial data from and for use by Scotland’s public sector, which has been extended from local authorities to academia and utilities.

The IS said the move has been prompted by the need to share data more readily in coping with the Covid-19 pandemic.

“This is particularly important when it comes to the locations of services that our citizens are increasingly reliant upon,” it said.

“Until now, there have been various versions of such data in circulation, which can cause confusion and mixed messages. Having one single and easily accessible version of such data is imperative and, as the national experts in the standardisation of addressable locations, the IS is best placed to be doing this on behalf of Scotland’s data community.”

It added that it intends to work with bodies such as NHS24, the Care Inspectorate and Public Health Scotland to provide authoritative datasets for other health and social care services, along with others that make location based data more accessible.

This is expected to include working with address custodians in local government to validate the data published.

While the pandemic has generally accelerated data sharing between different fields of care around the UK, many organisations have said they have struggled to obtain all the datasets they felt they needed. At a UKAuthority conference on health and care in June, 73% of respondents to an audience poll said that data was seen as more important in reaction to Covid-19, but 38% said they could not access all they needed and 13% said they could not obtain any.

The expansion of data available on the Spatial Hub could provide assistance to Scottish public sector organisations in dealing with a second wave of the pandemic.