The Driver and Vehicle Licensing Agency (DVLA) has said there is an increasing take-up by police forces of technology for officers to get instant access to a driver’s photo at the roadside. 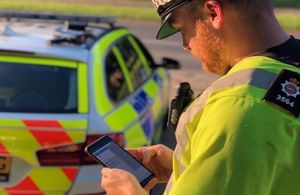 It said that 18 are now using the system with another 10 expected to deploy it within the next few weeks. A total of 86,513 licence images had been checked between the launch of a pilot project in August 2019 and June this year.

This follows the DVLA having worked with the Home Office to give police officers access to photos on its driver database. This enables them to confirm the correct identity of a driver almost instantly, compared with up to 16 minutes without the technology.

In some cases this can result in an arrest as the motorist is brought to the station to complete the checks.

It works through the police officer searching the Police National Computer (PNC) to obtain the driving licence number, which acts as a unique identifier which helps guarantee that the correct image will be accessed from the DVLA record. The officer will then receive the driving licence holder’s photograph to complete the check.

Driver images are only accessible during the enquiry and are not retained.

DVLA said the system has saved over 14,000 hours for road police officer units and local policing officers since its introduction.

It is now working with the Home Office to roll out the service to all 46 police forces in the UK.

Julie Lennard, DVLA chief executive, said: “As a digital organisation we are always looking at ways to bring technological developments into the public domain – providing improvements that can directly benefit citizens.

“The ability to support quicker and more robust roadside checks for motoring offences through the better use of technology is something we were pleased to help deliver.”