The Department for Transport (DfT) has launched a consultation and is planning trials on new uses of technology in transport. 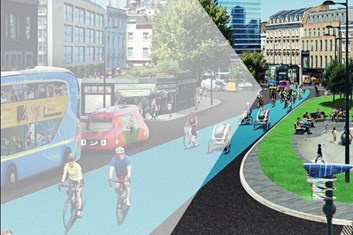 The initiative will include work on how to develop future mobility-as-a-service (MaaS) platforms, along with pilots on the use of technologies such as drones for medical deliveries and e-scooters.

It will support the effort with £90 million for real world testing in three new ‘future transport zones’, brining local bodies such as councils, hospitals, airports and universities into the trials.

The consultation document is aimed at making journeys easier and greener and includes a section on MaaS, pointing to the way that new data and digital capabilities are making it possible package different services together for travellers when they are planning journeys.

MaaS platforms require data on timetables and fares to be interoperable and available to platform providers, as well as enabling travellers to buy tickets digitally.

“Over time, new models also have the potential to be integrated within MaaS platforms,” it says.

But MaaS is still in its infancy and there is a need for trials to understand infrastructure requirements, and for a flexible but coherent regulatory landscape. The latter is in contrast to the current fragmented picture, the document says.

It also highlights whether people who do not have smartphones are being gradually disadvantaged by the growing use of digital platforms for providing information, booking and payment functions for transport.

The consultation – which is open until 22 May – also covers flexible bus services and micromobility vehicles. The DfT highlighted the potential of e-scooters and questions on whether local authorities should have extra powers to manage the impacts of the vehicles on public space – for example, where they can be parked – and a minimum age, vehicle standards and insurance requirements.

The three new zones set to receive shares of the funding are in Portsmouth and Southampton, the West of England Combined Authority region, and Derby and Nottingham. They will join the existing West Midlands future of transport zone.

One of the projects will involve drones carrying medical supplies from clinics on the Isle of Wight to hospitals on the mainland. This will help speed up diagnoses by cutting out time spent journeying on ferries and roads.

The DfT said that once these trials are complete, the drones could eventually be used to transport chemotherapy kits to save time and potentially lives.

Transport Secretary Grant Shapps, said: “We are on the cusp of a transport revolution. Emerging technologies are ripping up the rulebook and changing the way people and goods move forever.

“Our ground breaking future of transport programme marks the biggest review of transport laws in a generation and will pave the way for exciting new transport technology to be tested, cementing the UK’s position as a world leading innovator.”