The Defence and Security Accelerator (DASA) has taken its effort to explore the potential of telexistence technology a step further with the launch of a competition for funding support. 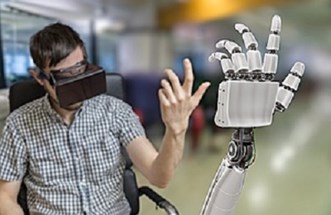 It has called on innovators to submit ideas for the use of the technology – which allows a human user to operate in an environment without being there – with the possibility of winning between £10,000 and £100,000 in support.

This follows its launch of a market exploration on the technology earlier in the year, along with the Defence Science and Technology Laboratory.

DASA, an agency of the Ministry of Defence, said potential use cases should be aimed at keeping people safe by reducing the risks of operating in a hazardous environment such as in ordnance disposal or dealing with chemical, biological, radiological or nuclear hazards.

It said this could be achieved by using a real time, remotely operated avatar that relies on an integration of telepresence (which enables the user to see and hear as though in the remote environment), robotics (which enables the user to interact with the remote environment), and haptic feedback (which provides sense of touch).

The competition is open for entries until 19 November, and projects should be complete by the end of May next year. There is the potential for this to be followed by a second competition to tailor telexistence systems to defence and security use cases.