The use of video in court hearings has received a generally positive response in an independent evaluation – along with a number of recommendations on how it can be improved. 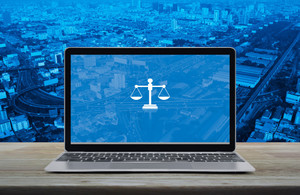 It says that improvements could be made in the presentation and management of the hearings, and that there should be further research on specific areas.

HM Courts and Tribunal Service (HCMTS) has published the report on phase two of the evaluation by Meredith Rossner and Martha McCuddy at the London School of Economics. It is based on a prototype version of the video hearings service released in November 2019, taking in observations of hearings, interviews with users and key stakeholders, and analyses of administrative data and documents.

The service has been developed to replicate the formal experience of a hearing held in a court or tribunal building. It has been applied to magistrates’ courts, with a recent extension to civil and family courts, and there are plans to extend it to tax tribunals and other jurisdictions.

For a key stage – user experience of the video hearings journey – users reported a high level of satisfaction with the level of support they received and were able to resolve technical issues.

On the hearings themselves, most users commented on the convenience of having a video hearing and the time and cost saved. Some also reported reduced stress and anxiety through being able to take part from home or their solicitor’s office.

The report’s recommendations include the development of guidance for lighting and framing for all uses, that the use of microphones and headsets is advisable, that judges should appear on screen with labels indicating their name and location, and that there should be platform signals for when a user’s audio or video fails.

In addition, there are calls to investigate ways of sharing late documents in a safe and secure way, that judges should continue to have a separate monitor to view all the parties, and that an email address field should be mandatory when forms become digital. There should also be further research on the user experience.

Susan Acland-Hood, HMCTS chief executive, said: “I welcome this report and its valuable assessment of the pilot of video hearings taking place across civil, family and tax courts and tribunals. It will add to the existing evidence base on video hearings and enable us to make further improvements.

“Audio and video technology has long played a part in the justice system and is a crucial tool in maintaining our justice system during the pandemic and beyond.”

Work will continue to develop and test the video hearings service to provide a remote option where appropriate, when participants cannot or do not need to attend a physical courtroom. Decisions about the use of video technology in hearings are for the judiciary to determine.

HMCTS added that there will be a further evaluation of the use of remote hearings during the Covid-19 pandemic.