City of York Council has begun to use city-wide real time transport modelling, claiming it is the first in the UK to do so. 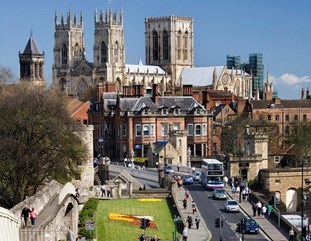 The deployment is part of the council’s Smart Travel Evolution Programme, which was awarded £2.85 million by the Government in 2018.

The council said that PTV Optima has been installed in its control room and enabled it to be more proactive in monitoring and changing the network live to suit traffic conditions.

It is integrated with over 100 live traffic flow sensors, more than 100 live signal controllers, live speed data across the network provided by TomTom, and up-to-date information about roadworks and other network changes.

The live model combines all this data into a single view for the control room team to see in detail what is happening across the whole network.

York can also use the system to test alternative scenarios for the next hour ahead, next day or weeks in the future.

Previously, the council has been reliant on staff monitoring CCTV and social media feeds, with network monitoring operators and transport engineers manually implementing new signal changes to manage the flow of traffic in busy periods.

As an example of what it can now do, it said if there was a road traffic collision on the York outer ring road, the new software will be able to predict the impact on the wider road network based on the current traffic conditions. This will give the council the ability to react live by changing traffic light timings across the city (where needed) and informing people sooner of the impact and possible delays.

Dave Atkinson, head of programmes and smart place at City of York council, said: “We’re delighted to be the first city in the UK to introduce this innovative and cutting edge technology to improve journeys and reduce pollution in York.

“At this early stage it’s already proving to be a success. We’re able to predict future traffic levels based on our live traffic behaviour and manage the flow of traffic better in busy periods by adjusting traffic lights to best suit traffic conditions.”

This is the first deployment of the system on this scale in the UK. Overseas cities to use similar modelling include Vienna, Abu Dhabi, Moscow and Sydney.