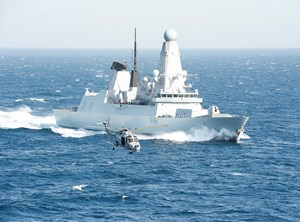 The contract is to develop electronic warfare equipment for the Royal Navy.

The new electronic warfare technology will allow the Royal Navy to detect simultaneous radio signals and increase the number of frequencies the Navy can monitor. As a result, anti-ship missile defences will improve, operational decision making and awareness of the theatre of action will increase, DE&S said in a statement about the procurement. This deal is the first part of a Maritime Electronics Warfare Programme (MEWP) that will see this technology introduced to the Type 45, 31 and 26 frigates and the Queen Elizabeth class aircraft carrier. In total, the MEWP programme will see DE&S invest £500 million in electronic warfare.

“The ability to understand and exploit the increasingly complex electro-magnetic environment is critical for the operational success of the Royal Navy,” said senior responsible owner for the programme, Royal Navy commodore Steve Prest. “This technology will ensure we maintain the operational advantage we need well into the 21st century.”

“Now the real work begins - delivering this crucial capability to the frontline to time and cost, and supporting the men and women of the Royal Navy in what they deliver for our nation,” said Rear Admiral Jim Higham, DE&S director ship support.

Babcock, Elbit and QinetiQ will also work with the Defence Science and Technology Laboratories on the design, build, deliver, and integration capabilities to the Royal Navy and DE&S before providing ongoing in-service support for the duration of the project, DE&S said in a statement.

The 13-year contract will create 170 jobs in the South West of England, which has the lowest unemployment rate in the country. The jobs are expected to be in manufacturing and software development.