Smart motorways to use new tech for safety

Plans for the use of technology have been included in a wider package of measures to improve the safety of smart motorways. 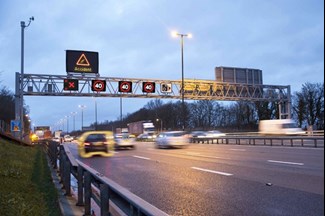 The Department for Transport (DfT) has publicised the package as part of the effort to assure the public over the future safety of the roads. They have been at the centre of protests that they are hazardous for drivers, largely due to the elimination of hard shoulders.

Secretary of State for Transport Grant Schapps outlined the measures in a statement to Parliament.

They include speeding up the deployment of ‘stopped vehicle detection’ technology across the ‘all lane running’ motorway network, so stopped vehicles can be detected and the lanes closed more quickly.

Highways England is to accelerate its plans and install the technology within the next 36 months, setting a clear public timetable for the first time.

Other measures include displaying ‘report of obstruction’ messages automatically on electronic signs, triggered by the stopped vehicle detection system, to warn drivers of a stopped vehicle ahead. This is currently being trialled on the M25 with a further trial planned for the M3.

The law has been changed to enable automatic detection of ‘red X’ violations using cameras, and there are plans to expand the upgrade of those on motorways to identify more vehicles ignoring the warning.

In addition, satnav providers will be encouraged to include functions that show the locations to stop in an emergency.

There are 18 measures in all, the most high profile being the abolition of the ‘dynamic hard shoulder’ on some motorways, which operates only part of the time.

Schapps said: “By these measures we ensure safety is at the heart of our smart motorway programme and assure public confidence in the motorway network. We will continue to monitor the data and work with campaigners to ensure that improvements are delivered.”