Innovation charity Nesta has said there are signs of ‘remote learning fatigue’ in schools following months of lockdown from the Covid-19 pandemic. 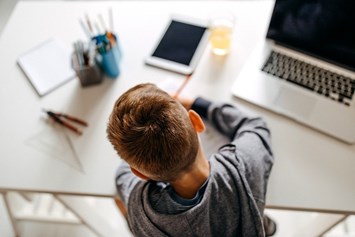 It has highlighted the issue, along with differing rates of adoption of educational technology and a narrowing of the ‘device disadvantage gap’ from a data analysis project it has run with the Department for Education (DfE) and analyst SchoolDash.

The exercise – which it has illustrated with a number of graphs – involved examining data from three (unnamed) edtech industry partners on the use of a maths learning platform, a platform accessed by parents and children to improve writing, and a platform to support parental engagement.

Nesta said the use of edtech has increased significantly, with big increases in teacher sign-ups and challenges set and done through the tools in the spring of 2020 and again early this year. But each spike was followed by a slow decline in the number of users and activity, and focus groups spoke about fatigue with using the platforms.

Another key finding was that take-up of the platforms in the early stages was lower among schools with more children eligible for free school meals (FSM), although it did catch up during the second nationwide lockdown.

Similarly, the device disadvantage gap – in which pupils at schools with high FSM levels were less likely to have devices with which work at home – was narrowed as the lockdown continued. This was attributed partly to the DfE’s effort to get laptops and tablet computers to disadvantaged children, which accelerated between last November and February, supported by schools’ fundraising efforts and local campaigns.

But Nesta warns that the ‘engagement gap’, in which there are fewer log-ins for schools with higher levels of deprivation, has remained. One element of this has been that parents or carers of pupil premium pupils have been less likely to make comments through the engagement platform than others.

“This analysis provides a glimpse of how children’s experiences of edtech during the pandemic have varied, revealing clear differences,” the report says.

“However, there are reasons for cautious optimism, particularly with changes in the relative adoption among schools with higher deprivation levels, and the narrowing of the device disadvantage gap.

“We can see the results of progress towards getting the fundamental components of more equitable digital learning in place, such as the availability of edtech platforms for teachers and children who want them, and the devices on which to access them.”

In March the National Audit Office published a report saying the DfE could have been more effective in support schools and pupils in remote learning during lockdown. It described a mixed performance in the DfE’s response and said that children from different backgrounds have had contrasting experiences of remote learning.