Data from national mapping agency Ordnance Survey has revealed the pressure local authorities in or close to national parks were under during the summer of 2021. 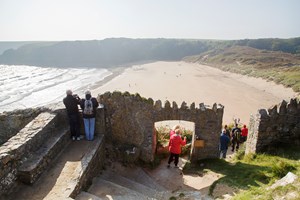 Ordnance Survey has revealed that Pembrokeshire in Wales received a 90% increase in visitors, Snowdonia 80% and the Trossachs in Scotland 86% compared to previous summers.

Ordnance Survey describes visits to national parks as undergoing “a huge surge”, as Loch Lomond, the Brecon Beacons, along with Pembrokeshire, Snowdonia and the Trossachs, were amongst the 15 national parks to report increased usage.

Outside of the parks, Bristol and Winchester were the most popular urban walking destinations during the summer of 2021, and the Chilterns was the most visited rural location close to the capital city. Padstow, Cornwall and Swanage, Dorset received the highest number of coastal walks.

The data also revealed the average length of a summer walk is now 12km, which has increased by 4%, and the number of summer walks increased by 46%, but British walkers are climbing less in 2021 than they did in 2020, perhaps due to further Covid-19 lockdowns. Ascent decreased by 36%.

“It appears people have tended to seek flatter routes this year with a significant decrease in the average elevation change across all three activity types – a potential suggestion of more newcomers taking to the outdoors and exploring less challenging routes,” said OS managing director for leisure, Nick Giles.

Ordnance Survey studied the logging and sharing of routes on its app OS Maps through June, July and August of 2021.

“Over the same four-month period, the number of users in the OS Maps app increased by 50%, suggesting an upward trend in outdoor activity in Britain over the summer months,” Giles said in a statement.