A Scottish Parliament committee has called for better scrutiny of how the police use drones and body worn video. 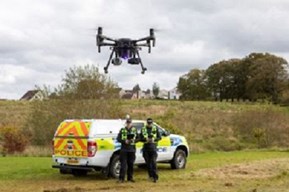 The Justice Sub-Committee on Policing has published a report on the issue raising a number of concerns about their introduction over recent years.

Among them is that Police Scotland has not always been clear on the number of drones it possesses, what they have been and will be used for, and if it has consulted with other bodies on their impact. The report says force provided contradictory and incorrect evidence for its investigation, there is insufficient governance in place, and that there are further concerns around the combination of drones with other technologies such as facial recognition.

Police Scotland has previously run trials on the use of artificial intelligence with drones.

It also points out that assessments on the human rights, privacy and data protection impacts were not carried out before the procurements.

For body worn video, it says Police Scotland does not have a standard operating procedure and it is unclear whether it has a code of practice for its use – both of which should be regarded as essential.

It makes a number of recommendations, including that the Scottish Police Authority should take a more comprehensive oversight role on any changes in police practice, in contrast to its scant monitoring so far in the roll out of drones.

It also says the use of drones and body worn video should be subject to regular review and checked against approved purposes.

In addition, it says the current restrictions on the use of drones should remain until a consultation takes place. The report indicates they have been used primarily to search for missing persons but there is also potential in surveillance, controlling crowds and controlling anti-social behaviour.

John Finnie MSP, convener of the sub-committee, said: “Technology undoubtedly has a place in policing. However, we have serious concerns that gadgets have been prioritised and introduced without some fundamental questions being asked or answered – by either Police Scotland or the bodies that exist to scrutinise them. This at a time when police IT systems remain in sore need of improvement to support basic policing functions.

“This is not the first time the Sub-Committee on Policing has uncovered issues similar to these, so lessons must this time be learned. Not only is the current situation far from best practice or what we deem acceptable, there is a serious risk that Police Scotland could find themselves on the wrong side of privacy or human rights legal challenges.”