Prisons in England and Wales are to receive a big investment in digital facilities and infrastructure as part of the Government’s plans for the service. 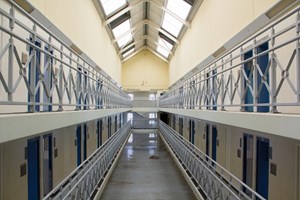 The pledges have come within a new Prisons Strategy White Paper from the Ministry of Justice (MoJ), and as part of a £3.75 billion programme to create an extra 20,000 prison places with six new prisons to be built over the next five years.

The paper reiterates issues raised in HM Prison and Probation Service’s most recent strategy, published in June of this year, highlighting the value of technologies such as video calling for prisoners to say in touch with their families during the Covid-19 pandemic.

It says that too many prisons lack basic digital infrastructure but there are plans to scale up the use of digital tools and data to support staff and help prisoners in rehabilitation efforts.

This will involve digital upgrades for 11 prisons over the next two years – in addition to the existing four and one youth offender institution – partly to support the use of in-cell laptops and kiosks.

In addition, new prisons will have an infrastructure for in-cell technology for prisoners to use education and training opportunities and stay in touch with their families. The MoJ has committed to continue offering secure family video calling.

This will be accompanied by introducing digital technology for prisoner interviews.

The paper also identifies a need to transform outdated data systems, such as the National Offender Management System. There is a long term ambition to create a single digital prisoner record bringing all the information on an individual into one place.

It adds that the MoJ will investigate the opportunities for data sharing between organisations to provide targeted support to prisoners and their families.

Other features of the white paper include the recruitment of an additional 5,000 prison officers, a retention programme to keep existing staff and more autonomy for governors in running jails.

Justice Secretary Dominic Raab said: “We’re building the prisons to incarcerate dangerous and prolific offenders. We’re deploying the tech to stop the flow of drugs, weapons and phones into prisons. And we’re re-orienting the regime to get offenders off drugs for good, and into work – to cut crime, and keep the pubic safe.”