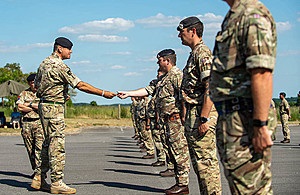 The 13th Signal Regiment will provide the basis of the new Army Cyber Information Security Operations Centre, focusing on the protection of defence’s cyber domain, and work with the Royal Navy and Royal Air Force to provide secure networks for all military communications.

It will consist of several cyber protection teams and technical staff, and provide technical support for a hub to test and implement information systems.

Personnel in cyber functions have been brought together from several sections of the Army, Royal Navy and RAF to form the regiment, built around a core of 250 specialists. It will be based at locations around a headquarters in Blandford, Dorset.

Defence Secretary Ben Wallace said: “This is a step change in the modernisation of the UK armed forces for information warfare.

“Cyber attacks are every bit as deadly as those faced on the physical battlefield, so we must prepare to defend ourselves from all those who would do us harm and 13th Signal Regiment is a vital addition to that defence.”