Highways England is accelerating the use of stopped vehicle detection (SVD) technology on smart motorways, the minister with oversight of the agency has said. 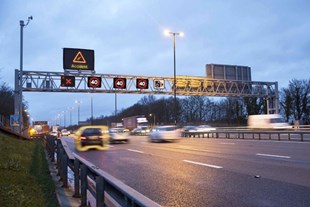 Transport Minister Grant Schapps said the move is being made as part of a speeding up of some measures in the Highways England Strategic Business Plan 2020-25.

Most significantly, radar based SVD technology will now be installed on all operational ‘all lanes running ‘(ALR) motorways by September 2022, six months earlier than planned.

Highways England has also made a commitment that no ALR motorways will open without radar technology to spot stopped vehicles, which should make it possible to close lanes when necessary and get help to drivers quickly.

It has been upgrading its SVD capability, having recently awarded a contract to Navtech Radar to provide a new system able to detect a stationary vehicle in 20 seconds, which should significantly reduce the time taken to alert control room operators of a problem.

Schapps highlighted the commitment to SVD in announcing the publication of a stocktake report on the progress in developing smart motorways over the past year.

Other measures include an upgrading of cameras to automatically detect ‘red X’ violations, and the introduction of radar based SVD on stretches of the M3 and M20, with work currently underway on the M1.

There has been controversy around the use of smart motorways, on which the hard shoulder has been removed from some stretches of road, leading to claims that it creates a new hazard for drivers in the event of a breakdown.

Schapps rebutted the claims, saying: “The data contained in the Highways England progress report continues to show that fatal casualties are less likely on all lane running motorways than on conventional ones. But we know drivers can feel less safe on roads without hard shoulders, which is why the progress report, published today, intends to accelerate a number of actions to provide reassurance to drivers.”

But the chair of the House of Commons Transport Select Committee, Huw Merriman MP, made clear that the anxieties have not been allayed, pointing to its ongoing inquiry into smart motorways.

“We will consider all options based on the evidence," he said. "This may include recommendations for change and whether the roll out should be paused and hard shoulders reinstated.

"We will look closely at today’s announcement from government that smart motorway construction will continue. We will consider the evidence basis on which it’s been made.

“Our prior report from 2016 made it quite clear that we challenged the safety and roll out of smart motorways. The safety enhancements and reassurances given to us by Highways England in 2016, and in subsequent years, do not appear to have been delivered in full."

As an example, he said a commitment made in 2016 for the retrofitting of SVD technology on ALR motorways already in place has not been fulfilled.