The Department for Transport is considering whether to allow drivers to delegate control of their vehicles to an automated system designed for driving within lanes on motorways.

The department has opened a consultation on the use of automated lane keeping system (ALKS) technology on motorways in Great Britain, which will close on 27 October.  ALKS, which is likely to be available in cars from next spring, is designed to drive vehicles automatically for extended periods of time within a lane. 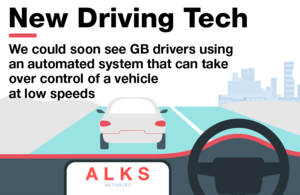 The consultation will consider whether the technology provider would be responsible for the vehicle’s safety when the system is in operation, rather than the human in the driving seat. ALKS has initially been designed for relatively slow speeds such as traffic jams, but the consultation will seek views on government proposals that it could be used at up to 70mph.

“Automated technology could make driving safer, smoother and easier for motorists and the UK should be the first country to see these benefits, attracting manufacturers to develop and test new technologies,” said transport minister Rachel Maclean.

The department plans a public consultation later this year on changes to legislation and the Highway Code.

While ALKS would allow vehicles to drive automatically for long periods of time in the right circumstances, drivers would have to be prepared to take back control at short notice and it will only work on highly controlled roads such as motorways.

“This system is a radical departure into the brave new world whereby you are putting more of the trust into the vehicle than the driver,” AA president Edmund King told The Daily Telegraph. “Technology is one thing, it is also how drivers react to it – so will they panic and turn it off too soon or will they use it on the wrong kind of roads?”

Separately the Defence and Security Accelerator said it is looking at the potential for using autonomous vehicles in military logistic convoys. This could include ‘platooning’, where humans drive leading vehicles with automation used for those following.