Elbit Systems UK has taken on responsibility for supporting and modernising the Royal Navy’s shore based training simulators. 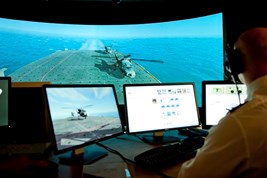 It has moved into the role as part of the Team Fisher consortium, led by Capita, which took over the contract for Royal Navy training in April 2021.

The simulators cover functions such as operator training, command training and collective training for Trafalgar class and Vanguard class submarines and Mine Counter Measure Vessels.

A spokesperson for Capita said initially Elbit will take on managing the simulators and there will be some unspecified modernisation in the future.

David Hook, managing director of Capita Defence Training, said: “Over the next 12 years, we will work with our partners and the Royal Navy to continue to modernise and improve the service to enable Navy personnel to fulfil their potential. Taking over the running of training simulators is a key step in this programme.”