An-Chan Phung, Chief Innovation Officer (MDM) at Civica examines how efforts to join up data to improve services in the Manchester city-region are providing lessons for others in the UK

The Greater Manchester region is busy implementing processes and technology to overcome the challenges of sharing of data in public services; with the combined authority, local authorities, NHS bodies and emergency services working together on a series of initiatives to boost long term collaboration and further improve services. 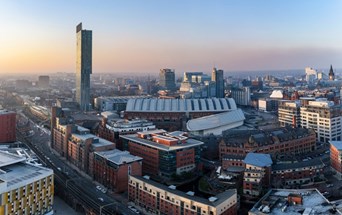 These are providing lessons and new thinking that could influence data sharing at a regional level around the country, some of which emerged from a UKA Live discussion, which included lead enterprise architect for the combined authority, Jon Burt, chief intelligence and analytics officer for the Greater Manchester Health and Social Care Partnership Matt Hennessey and Helen Olsen Bedford from UKAuthority.

The discussion reiterated the strong rationale for joining up data from different public authorities – that it leads to better services. It also highlighted the need for a balance between sharing data and protecting individuals’ privacy, something which is often difficult to obtain despite the huge amount of guidance available.

This was shown in an audience poll on the three main blockers to sharing across place and multiple agencies – the biggest blocker shown was that the governance had not been agreed.

There is a sense of progress being made, supported by the availability of identifiers that make it possible to share data without directly identifying individuals. In Manchester, Jon Burt has seen some matching of NHS numbers with unique property reference numbers (UPRNs) for addressable locations to support health and social care. But there are limits to the legal use of the NHS number that restrain it to care services. Identifiers also suffer from common data problems such as availability, accuracy and accessibility.

This approach means organisations do not move data into a central source, but sign up to exchange information as needed with appropriate bodies in a format based on agreed standards. This could be supported by common features such as UPRNs, NHS numbers or other identifiers that can be applied to people, organisations and places such as schools and care homes.

It all comes down to standardising elements to work in different scenarios and relates to the adoption of a mesh approach to sharing data. The Greater Manchester Data Mesh is among the plans for the city-region, involving standards, interfaces and a master data service to support the sharing of information from different organisations. The blend of the right people, processes and technology underpins the data mesh.

Hennessey said that the technology part is well understood.  The challenge is the governance and processes around sharing data, that respects the privacy and security of the individual, while providing a robust dataset for the efficient delivery of service. Ensuring that you have support of people at the right level is critical to the success of the project.

Core to the mesh's effectiveness is the use of probabilistic matching between datasets, which can recognise when details may not be identical but have a high probability that they refer to the same person or entity. It can handle large volumes of data matching on an automated basis, with manual checking flagged for a lower 'probability' of match to ensure accuracy. Matching and linking information from multiple data sources removes the need for a common identifier and provides a unified dataset that combines that accuracy and completeness of data across the data sources. This results in better data quality and sets out a data foundation for the effective and efficient delivery of proactive services.

In turn, this can help better targeting of resources, finding people and places which need a co-ordination of services from different sources. The initial emphasis is on health and social care but there is potential to use it more widely.

Another possibility is the adoption of personal data repositories that would remain under the control of individuals to share the elements of data as they think fit. It is an idea that has been around for some time, with the availability of personal data stores and a project lead by Sir Tim Berners-Lee to create a platform for social linked data and ‘solid pods’ for individuals. Take-up of the former has been slow and the latter is a work in progress, but there is a recognition that these have potential to support regional data sharing.

Burt also identified that while data is often discussed as a single entity or topic, it should always be defined in relation to the use case. While everybody wants a single view of the data they need, the details depend on their role: for example, it will be different for a social worker than for a chief executive.

Hennessey pointed out there are also questions about the parameters of a search, what to do when datasets are not complete, what happens when the data cannot be matched and how to treat any missing values. This all goes back to the need for a lot of work on data quality before it can be used more widely.

Such factors are going to be important in the future development of Greater Manchester’s ecosystem for data sharing, and for other regions around the country. It is a highly complex outlook with a great deal of progress already made and it’s laying the framework for effective and efficient information sharing. There are three key points to remember in making progress:

We need to recognise the difference between data and intelligence, the latter involving inferences from the former and a lot of information that will never sit neatly within a dataset. There are insights beyond the immediate ones in a dataset, especially when combined with real time data, and these could be used to take services to a new level.

Someone has to take ownership of the data issues within the organisations involved. This shows the importance of a chief data officer, responsible for ensuring data is used for the benefit of people rather than organisations.

A first step to solving a problem is to search for appropriate models that have already been deployed and talk to peers in public services. As more regions become more ambitious with data sharing they will develop approaches that can be replicated and evolved for the good of authorities and benefits of the citizens around the country whilst treating data securely and respectfully.

It’s all part of the same effort to make a big contribution to the future of public services – which are successfully joined up at a regional level.

You can catch up with the full UKA Live discussion here